Is that a word?

No, but it should be.

My last post mentioned some of my interests. Based on the title of the page (and this post and this post) you can guess I am into guns, as well. I'm also into cars. I'm not a gearhead or grease monkey, by any means. I just like cars.

And while Jeremy Clarkson may take the piss out of James May for getting overly pedantic regarding cars, engineering, physics, and design, it is entertaining because they DO IT TO BE ENTERTAINING. They are in on the joke. They expect you to be in on the joke. They expect the audience to understand the humor of a scraggly-haired car nerd at a white board describing the innards of a hovercraft.

Another example of Top Gear acknowledging their personal foibles is Clarkson going on about power, speed, and guns in his exuberant, pseudo-jingoistic manner (imagine a twelve-year-old with a monster truck fitted with rocket launchers and you will have a good idea).

Where I come to the point

Let the theatrics commence. I can wait.

I showed the video to a friend. This led to questions about biathlon rifles. This led to biathlon, itself. I then happened across a great video produced by Sturm, Ruger & Co. Featuring Annelies Cook from the US biathlon team, the video shows a typical biathlon rifle and the use of it, including the unslinging and slinging (watch all of the various manual checks and manipulation a of covers).  There is some awesome footage of the shooters, proper form, and discussions of how they do what they do.

After viewing this video, I accidentally neglected my mantra. And this one time, it was gold.


Gun Guys in the audience will recognize some incorrect usage (clips, bullets, shells, and the like). As can be expected, some of "those guys" make an appearance on the comments lamenting the use of perceived incorrect terminology, America's lackluster biathlon performance in the Olympics, and what can only be described as a cross between "kids these days" and "get off my lawn!"

The following dialogue from the YouTube comments on the Biathlon video (screen-capped for posterity) made my day. It involves BOTH types of gun guys. 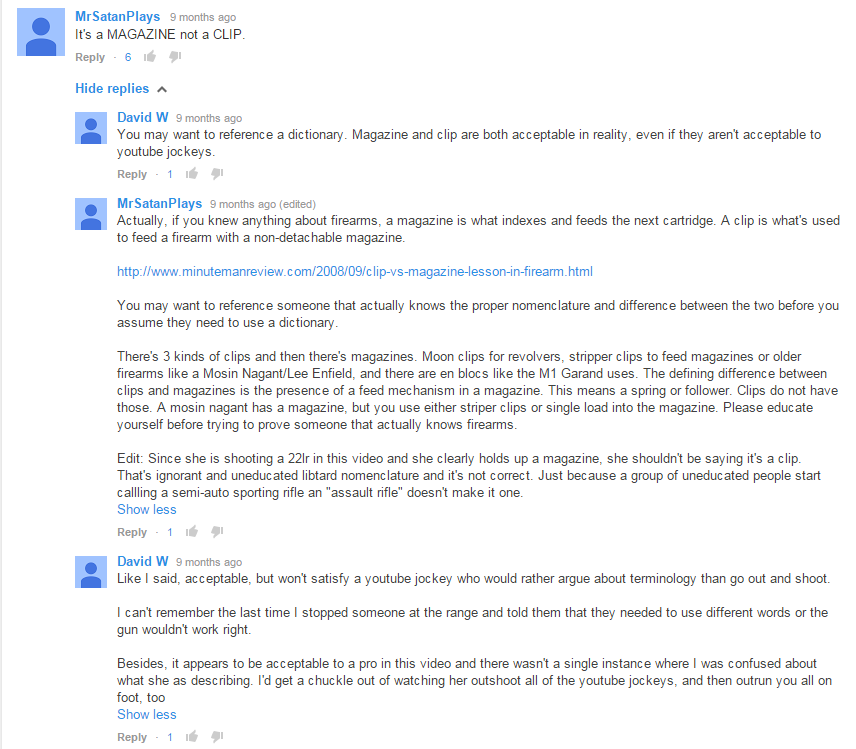 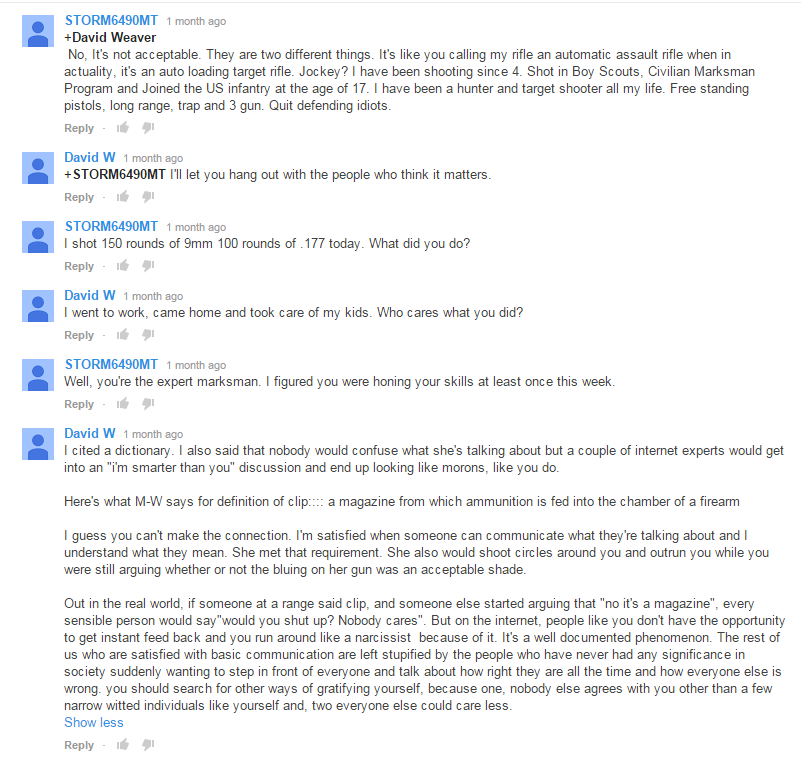 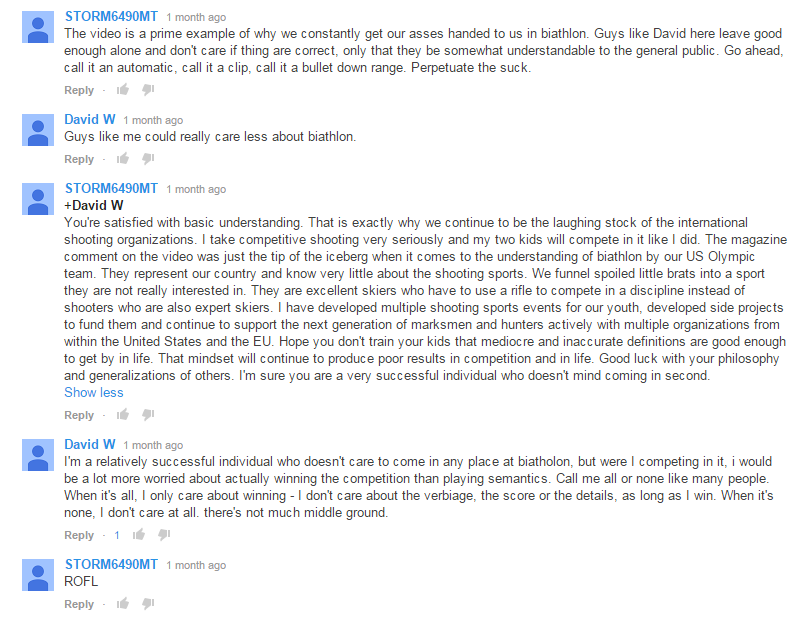 David W. is my new Hero of the Interwebz.

He used his wittiness, knowledge, and snark to defend against the demons of pedantistry. As another associated the woman's use of firearms terminology with reasons behind how America sucks at biathlon, David W. kept his calm and poked the troll in such a manner that he started using all sorts of unrelated arguments (the supposed wealth of Olympians, his military experience, and the use of the word 'Libtard' - the hallmark of all well-planned defenses).

In search of a common language


While watching this discourse, I began to ask myself why we cannot progress beyond this argument of pedantic terminology. I remember getting into arguments about this more than three decades ago - as a GRADE SCHOOLER!

Yes. A magazine and a clip are, pedantically, two different things.

Yes. A bullet and a shell and a cartridge are all different things.

But people (most people) use them interchangeably. Most of us (students of firearms history and related esoterica) prevent ourselves from getting the vapors when we hear someone describe how they load bullets into a clip. We stop ourselves from hollering at people "It's a Magazine!!!"

You should too.
Posted by Liberal Gun Guy at 11:11 AM No comments: