Wow... this has been an intense few weeks...

After finally allaying the fears of my friends that something was wrong, I started to slowly dip my toe back into the pool of Facebook.  It was a good, albeit weird, few weeks. I stepped back, took a few breaths, and realized that I don't have to do Facebook. Especially at the level I had been Facebooking. Keep in mind that I am someone who - for several years - had been telling friends in the museum field, "You HAVE GOT to be on Facebook!"

That doesn't sound so intense!

Only because it's not.

It was/is everything else. I would say nothing much, and then I stand back and look at the whole. I am feeling that the big exhale is coming up but that is just because I feel like I have been holding my breath for the last few weeks.

Something that has been a spectre during this time of year is the anniversary of my mom's passing. We lost her to ALS four years ago (until recently, my most-viewed blog). As close as I was to her, I felt that I was dealing well. Until this year. There have been a few moments these past few months when I caught myself finally realizing I miss my mom. So with the anniversary coming up, there are thoughts. Time does not heal all wounds. Good huevos rancheros help. That or magnums of Berenger while eating taco chips... 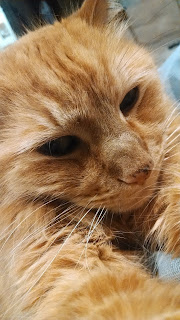 Compounding this was the passing of our cat, Merley (мурлыкать). We had this little guy for most of 20 years. He was the youngest of our '50 pounds of cat'. Merley allowed us to live in his house for the last six years, having lost his buddies Caramel and Tigger to diabetes and cancer.

As much as they were all our cats, Merley was mine. I was the one who brought him into the house the first time. I named him, I was the one whose lap he went to. When I moved to the new job in November, he came with me as my roommate (well, he and the fish). He was the only thing that got me through living alone for two months. He was my little buddy. He flopped on my chest. He groomed my beard. He woke us at all hours with what one friend referred to as "The Cry of the Demon Cat." And he was my furry little buddy.

The last couple of weeks saw age catch up with him. One night last week, Merley passed away in his sleep. He is now somewhere annoying Caramel and Tigger with his pouncing and cuddling. But I can still hear him messing around in the house. That or we think of the doors we no longer have to close, the litter box that is no longer in the way, or the food and water we no longer have to refill. It's the small things, but that still fails to lessen the hurt.


While this was going on, my soccer fandom expanded by one team. Through watching John Green's FIFA 16 series playing the Wimbly Womblys, I was introduced to the story of AFC Wimbledon. With all of the attention on Leicester's rise from near relegation to champion of the Premiership, AFC Wimbledon's tale has received short shrift.

Fourteen years ago, the local community created AFC Wimbledon in response to the previous home club being moved to the town of Milton Keynes (46 miles as the crow flies). Starting with tryouts in the city park, the locals took pride in their 'phoenix' club. Starting in the 9th tier of the English Football League System, the Dons were promoted 5 times in 9 seasons. Finally arriving in League Two of the Football League, they saw a few rough seasons, near relegation, and a brilliant run of great play this past season.

Two weeks ago, AFC Wimbledon finished their regular season in 7th place on the table. This qualified them for a four-team playoff to determine the final club to be promoted to League One. After a win and a draw against Accrington Stanley, they received a date with Plymouth Argyle at Wembley Stadium. FREAKING Wembley Stadium. A club with a home grounds capacity of 4,850 (half standing) playing on a pitch surrounded by 90,000 seats...

This week, the club formed in 2002 beat Plymouth Argyle 2-0 and earned their promotion to the same league with the MK Dons - the team that used to be the team from Wimbledon. Being in the States, I had no easy way to watch the match. Twitter and several news feeds gave me the lowdown - but I still yelled out when Lyle Taylor scored - eliciting a "Daaaaaaad!!!" from TheGirl - and sang John Green's "Akenfenwa" song after the PK in 90'+10', laughing and crying as I did so.  John Green - the guy who piqued my interest in the club was at the match and shared his experience in his vlog. At the end, I again started laughing and crying.

With the downs come a few ups.

This has been a weird Spring. Some house cleaning - mental and otherwise. Some drama - at home, online, in the world.

But there is good. Good for all of us. We just have to look for it. It doesn't just show up. Don't be lazy. Be active in seeking it out. Huevos rancheros, kitty hugs, or Cinderella stories. Be welcome to shed tears.

Just make sure to look for and embrace the happy. 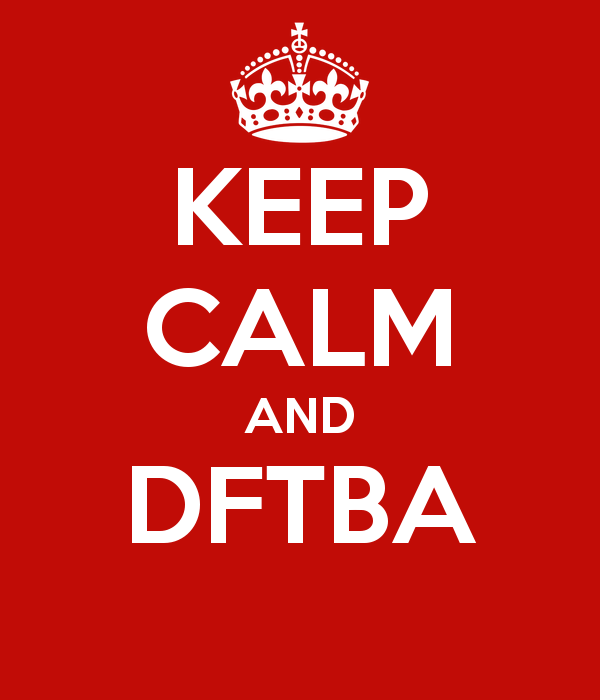 Posted by Liberal Gun Guy at 10:04 PM No comments:

After many, many years of being on Facebook (July 2, 2008), I think I am good with stepping away.

And, yes, I know some of my friends and family have called it ‘Davebook’ in the past - and for good reason. I am a chronic Facebook poster, sharer, over-sharer, linker, liker, etc. I have maintained a few pages related to my personal interests and politics. I created and managed a group related to Military Music. I connected and reconnected with people I have worked with, grew up with, and played with (music, games, whatever). And now I think I am good.


Now. What's all this about NOT actually leaving...

Well, several things came up as I was thinking about getting away from Facebook. Part of this is tied to Facebook's insane hold over EVERYTHING on the internet. Whether it is UPS or gaming sites, signing in via Facebook will get you in the door. So there is that.

The main reason is I don't want to lose contact with my people. Yes, I said 'My People'. Most of the people on my page are people who want to come into contact with me - or at least are willing to put up with my nonsense. And by nonsense, I mean anything from Star Wars to video games to K-Pop to politics.

There are some people I have only known through Facebook. I am closer to some of these people than people I have known since childhood. One of these close friends recently posted the following:


So do you all have "sacred" people?

I know. That sounds weird.

But what I mean is, there's family. There are friends. But beyond those levels of intimacy, there are a select few people who could do no wrong you would find unforgivable. People you're intensely protective of and loyal to. Yes? No?

Is there a term for that? Love is insufficient. I've thought a lot about this, over the years. Despite my lack of religious leanings, the best word I've come up with is sacred.

A number of these folks have become my sacred people. Several of them know who they are. That said, yes, I am Terry. You can be Wayne or you can be Garth. I won't judge.


So, why are you leaving then?

There are a few reasons.

Primarily, Facebook itself, and my inability to not browse, comment, link, browse, link some more... wash, rinse, repeat. I will be the first to admit I have a bad case of FOMO. But then I also have the insufferable need to tell everyone what I have learned. That and I have limited self control. Basically, I am a monkey with clothes and no tree to live in. I am working on that. I put a down payment on a tree.

A second reason is that it is getting mean. Not just run-of-the-mill mean. This is getting to be a full-bore, GIFT-esque assault on anyone who even slightly disagrees with you. I have seen otherwise sane people turn into complete asshats for the simplest reasons. I used to be one of those people. A friend called me on it. I thought I was being funny but I realized I was being a dick. I am tired of calling people on it. I'm not a cop and I am done thinking I need to be a referee (online, anyway).

Finally, I am looking for a change. I am getting rid of the comfort. As I was thinking about why I wanted to get away from FB, I came across this video from Linn/Darbin Orvar, one of my fave YouTubers. She states it much better than I feel I could.

There are other reasons - Not wanting to filter yet not wanting to offend; Disappointment with humanity; Election malaise...  But nothing I need to go in to here (at least right now). In general, I feel I can't be who I want to be online.


So what HAVE  you been doing?

My online socialising has seen me getting more into Twitter, Instagram, Snapchat, and Tumblr (links below). My online education has seen me going to YouTube, picking one topic, and letting it roll from one video to the next. Ted Talks one day, Video Game Design another. Soccer Laws of the Game; K-Pop; Prop Modeling; Carpentry; Gaming...

It is amazing what you can get done while listening to people who know more than you about a subject.

Less stress. I feel like I have time for other things. It's not interfering with other aspects of my life. I don't feel like I have to check my phone every five minutes to see what is going on. I take more of an active role in what is going on around me. I get to realize that there are other things I can do other than scrolling interminably through a newsfeed of what Facebook wants me to see - not the newsfeed I want.

To top it off, I get to do all of this without feeling like I am missing out on the latest 'big thing'.

The downside is that I don't feel as if I am involved in the lives of my friends out there in the big blue world. From Atlanta to Portland - with side trips to Canada and Europe - many of my favorite people are only accessible through FaceBook. I now miss their lives. And I am sad.

So. If you want to contact me but you are not currently a friend on Facebook (I won't be accepting friend requests for the foreseeable future), You can reach me at the following:

And for all of you - be good to each other. It's a short life. Don't piss it away.
Posted by Liberal Gun Guy at 3:39 PM No comments: