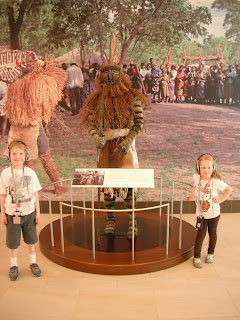 Last week, we took a trip to Phoenix.


While trying to figure out what we wanted to do, a friend of my mom told us some great things about the Musical Instrument Museum.

Having already heard about the MIM through articles in the LA Times, the NY Times (a review I both agree with and would argue against in parts), and having spent much of my life as a musician (from piano to sax to electric bass to some percussion) and the last decade or so as a museum professional, I thought this would be a great idea! I'm always looking for good exhibit, signage, mounting, and other ideas to steal.

All-in-all, it was a great visit. I enjoyed it, my wife (another museum nerd), my mom, and (most importantly) my kids enjoyed it. Well, the kids did for awhile. Although the novelty wore off for them after about 30 minutes, they did enjoy the Experience Gallery (you'll see later).

The exhibits are laid out similar to some art museums or the various ethno-historical/anthropological museums. Each national/ethnological area has a selection of instruments from the area's peoples and musical styles. There is also a video screen in each section. The video screen plays a selection of performances utilizing these instruments. 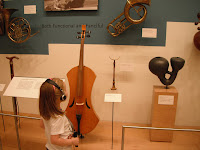 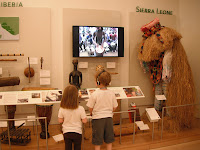 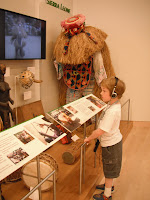 One of my pet peeves in museums is the use of exhibit-related headphones. Partially, this is a result of not knowing who had the headphones last and if the museum staff is diligent in following their sanitization policy. The other reason - more directly tied in to the visitor experience - is that headphones can prevent groups from having a shared experience. Knowing this, imagine how thrilled I was when we were handed headsets after paying our admission.

The headsets are tied into a wireless transmission that broadcasts immediately in front of the screens. This signal carries the audio for the video on the screens. This allows the visitor to listen to the audio without it being distracting or continuing after leaving the area of the exhibit.

For an example of this in action, watch the video. The back half of the video is the Exploration Gallery.


My main (and only real) complaint about the museum is the same complaint I had about a place where I used to work (and the main issue held by the NY Times reviewer). It's set up like a music store. There are all of the instruments, footage of them being played, and a place to try them out. However, there is little in the way of discussion of the development of the instruments, the musical styles, and the importance of the instruments in the various cultures. In many ways, it is an example of the museum version of "Here's all of our stuff!" 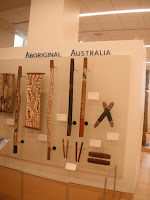 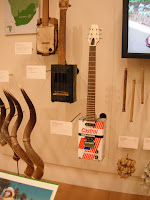 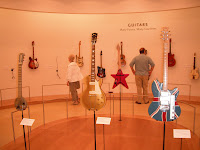 Now I know that this is more than a bit simplistic, but it does point out the one big issue. I am guessing that the big takeaway a lot of folks will have is along the lines of, "I didn't know there were this many instruments in the world." I doubt that this is what the Curators, much less the Director or the Chairman, former Target CEO Robert J. Ulrich, really want as an outcome. However, given the folks involved in the museum's curation and design, I would expect that there is something going on to improve this.

Email ThisBlogThis!Share to TwitterShare to FacebookShare to Pinterest
Labels: museums

Unfortunately, they are all about "here's all of our stuff."
I would argue that rather than being a museum- they are an entertainment venue with a collection.
Real museums do not subject their collection to upwards of 500 lux light levels. Real museums do not shun "Do not touch" signs and take precautions to prevent casual visitor handling of collection items.
Ulrich has actually said "I bought and paid for everything and if something gets ruined I will just buy another one."
Some day they may mature into a real museum. In the meantime, they are certainly worth visiting but don't be fooled into thinking they are a museum.
Signed,
Someone who has worked there and knows better.

I love that you admit you go to steal ideas, isn't that what we all do??? They were recently hiring a curator, so I wonder if that person will help with the interpretation versus the store feel...since as we know, advisory councils with the best of the best can sometimes get nothing done...